This page contains information about how teachers can scaffold tasks to make them manageable by ESL students.

This page was prepared to accompany a series of workshops that I held for mainstream teachers at Frankfurt International School. The primary purpose was to demonstrate with multiple examples how the Smartboard could be used to help ESL students understand subject content, and thereby indirectly develop their English proficiency.

The theoretical basis for workshops is provided by three renowned researchers in cognitive / educational psychology and second language acquisition: Vygotsky, Krashen and Bruner.

Scaffolding is the term given to the provision of appropriate assistance to students in order that they may achieve what alone would have been too difficult for them.

Visual scaffolding is support that includes images and words that can be seen as well as heard. Visual scaffolding is an excellent way to provide comprehensible input to ESL students so that not only will they learn the essential subject content but also they will make progress in their acquisition of English. 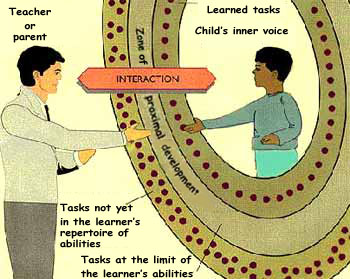 Stephen Krashen, a researcher into second language acquisition, devised a similar notion for the kind of input that an ESL student needs in order to make progress in acquiring English. He called this gap i+1, where i is the current level of proficiency.

Clearly, an ESL student cannot cope with or learn from language input that is at i+6 or i+13. The input must be made comprehensible. Indeed, Krashen states that comprehensible input is a sufficient condition for language acquisition.

However, Krashen further claims that no language will acquired in the presence of the affective filter. This simply means that a ESL student who is nervous or bored in class will learn neither subject content nor new language, even if the input is comprehensible.

Jerome Bruner, researcher in cognitive and educational psychology, coined the term scaffolding as a description for the kind of assistance given by the teacher or more knowledgeable peer in providing comprehensible input and moving the learner into the zone of proximal development.

Scaffolding includes all the things that teachers do already when they predict the kinds of difficulty that the class or individual students in it will have with a given task. Typical examples are the activation of background knowledge at the beginning of the lesson or a brief review of key vocabulary at the end of it. The Writing Process is another prime example of scaffolding.

The importance of visual scaffolding for ESL students

ESL students are particularly dependent on scaffolding, but often the purely oral scaffolding undertaken by the teacher is not enough. ESL students greatly benefit from the type of scaffolding that makes extensive use of visual aids – hence the term visual scaffolding.

When students can see an image of what the teacher is describing or see the key words that the teacher is explaining, this not only serves to make the input considerably more comprehensible, but serves to remove the affective filter which results from the fear or boredom that comes of understanding very little in class.

The Smartboard and associated software such as PowerPoint are excellent tools for the production and viewing of content that is both interesting and comprehensible.

Important: Like the real scaffolding in everyday life, visual scaffolding can and should be removed when it has served its purpose.